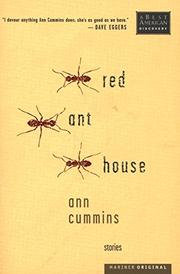 In the title piece, young Leigh’s friendship with the pathetic new kid on the block culminates when they expose themselves to the neighborhood pervert, but the story’s real power derives from claustrophobic working-class world Leigh resides in. In “Trapeze,” a slightly older girl, Karen—like Leigh, Catholic and from a big family—is tormented by her gymnastics partner. Karen survives, even prospers, but also hardens in a heartbreaking way. Willa, another tragic survivor, wins a Pyrrhic victory of wills and love against her widower father in “The Shiprock Fair.” Unlike most of the tales, “Blue Fly” is set at the turn of the last century and has a boy at its center, orphan Madison Evers, whose poignant longing for love focuses on his brother’s wife. As the protagonists grow up, the stories become bleaker, many mere snapshots of hopelessness. So the pieceworker of “Where I Work” and the young girl about to go off with a stranger in “Dr. War is a Voice on the Phone” are victims without a chance. “Crazy Yellow” returns to the world of children, but eight-year-old Pete, who lies to his sick mother and ends up alone in the house with yet another of Cummins’s ominous strangers, lacks the survival instincts of Karen or Willa. The richest stories reach beyond victimhood into more complex emotional territory. In “Headhunter,” a young woman on her way to visit her idolized father ends up in a fatal confrontation with another motorist and walks away thinking more about her father than the dead man. In “Bitterwater,” the self-awareness of the narrator’s Navaho husband, who abandons her and ends up in a detox center, is an oddly reassuring surprise. The other piece about marriage, “Starburst,” plumbs the twisted loyalties and understandings between spouses as a policeman who suspects his wife of theft finds himself aroused by her recklessness.

Strong if uneven: the emerging voice of a new talent to watch.