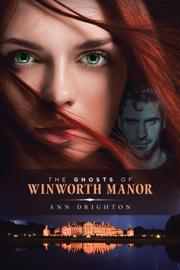 THE GHOSTS OF WINWORTH MANOR

A 200-year-old spirit in search of a bride torments members of a family both living and dead in this paranormal thriller.

Michael Winworth has haunted the Winworth Manor for two centuries. He yearns for a bride but can only travel so far within his New York seaside town. So he coerces help from Mayor Jonathan Gilmore, over whom Michael has leverage. The ghost killed his wife, Karen, for planning to demolish the manor and now owns her soul. He’ll free her if the mayor brings him Jonathan’s 16-year-old niece, Sarah. Michael is enamored of her and vows to kill anyone who would act inappropriately toward her. A practitioner of dark magic when alive, Michael becomes a voice in Sarah’s head and appears before her inside her unconscious mind. He also has sex with her by force and by “lowering” her inhibitions, acts that the teen rightly deems rape. But when Sarah later faces living human menaces, Michael responds homicidally. Local cop Lt. Eric Johnson investigates and, notwithstanding Sarah’s ghost story, looks for a flesh-and-blood killer. Meanwhile, Michael threatens to murder Sarah’s dad, Robert, if she doesn’t willingly marry him in an eternal union. Drighton’s paranormal tale is frequently disturbing. Most notably, the narrative during Michael’s rape of Sarah is in the style of erotica: "This caused her opening to reveal more of her most forbidden fruit, and he longed to taste her sweet nectar.” But Michael’s villainy is unquestionable, as he periodically tortures his brother Jason’s soul. The dialogue-laden story is fitting for scenes with spirits, including Michael and Sarah’s mother, Helen, who tries helping her family. Things get progressively darker as certain characters become seedier and Michael eventually takes over someone’s body with unnerving results. Readers will likely anticipate more mayhem in the book’s final chapters.

A grim, disconcerting tale of ghosts and supernatural assaults.