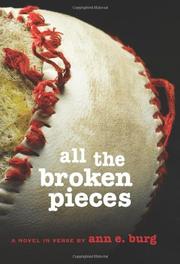 ALL THE BROKEN PIECES

Matt Pin’s story, told in first-person verse, opens with the evacuation of refugees near the end of the Vietnam War. Afterward Matt, an Amerasian, is adopted by a loving American family. Two years later, he remains haunted by a past in which his soldier father abandoned him, his mother gave him up and his brother was maimed before his eyes. He suffers deeply from prejudice when he tries out for the school baseball team and from his misunderstanding of both his biological and adoptive families’ motives. Through the efforts of two veterans, Matt begins to understand that his mother gave him away because she loved him, not because he was culpable in the crippling of his brother. In recognizing the analogous suffering endured by others touched by the war, Matt begins to resolve the conflicts of his spirit. Graceful symmetries between brother and brother, father and son, past and present, guilt and forgiveness shed light on the era and the individual. The verse form carries highly charged emotions and heavy content with elegiac simplicity. A memorable debut. (Historical fiction. 10-14)