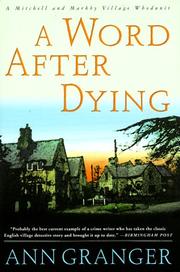 A WORD AFTER DYING

Bamford’s Chief Inspector Alan Markby and longtime girlfriend Meredith Mitchell (A Touch of Morality, 1997, etc.) are on holiday in the tiny village of Parsloe St. John, staying in the cottage bequeathed to Markby’s brother-in-law Paul by his late Aunt Florrie. Meantime, next-door neighbor, retired journalist Wynne Carter, is worried about another recent death—that of wealthy, elderly recluse Olivia Smeaton, dead of a fall down the staircase of the Rookery, her elegant manor house. Wynne’s not convinced the fall was accidental and wants Markby to investigate—unofficially, of course. And so Markby and Meredith soon run into a few of the village’s odd characters: Olivia’s housecleaner Janine Catto, unmarried mother of two; Ernie Berry, a hard- drinking bully, ladies’ man, and odd-job worker; his loutish son Kevin, and junk-shop owner Sadie Warren, rumored to be a witch and the leader of strange doings at the site of ancient standing stones on the town’s outskirts. Some troubling acts of vandalism begin to seem trivial after Meredith comes upon the headless corpse of Ernie Berry on the grounds of the Rookery. It takes Markby’s meeting with Olivia’s detested brother-in-law Lawrence, lots of help from Meredith, and the remainder of their vacation before this two-sided puzzle is solved. The story’s meandering mysteries are less compelling than Granger’s depiction of an insular mini-society. Lovers of the village traditional will find little suspense but an adequate measure of leisurely entertainment.