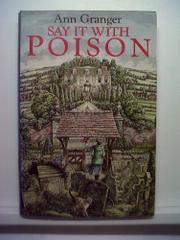 SAY IT WITH POISON

A trimly competent first novel set in Westerfield, a sleepy Oxfordshire village where Foreign Service Consul Meredith Mitchell has come to attend the wedding of her godchild Sara, daughter of her much married film star cousin Eve Owens. Eve is her usual glamourous self, on the verge of signing with American producer Albie Elliot, who's also a house guest, and seemingly thrilled with Sara's up-tight yuppie fiancee Jon Lazenby. Meredith's discovery of a couple of gruesome packages left at the front door presages trouble, and it arrives when she finds the poisoned body of Phillip Lorrimer, the young potter who lives next door. Hints of blackmail surface, and there's another killing, as Chief Inspector Alan Markby works on the case — but its roots are in the past and the ghost that haunts Meredith is finally exercised with the solution. A neat plot with convincing psychological underpinning and a refreshingly tart, down to earth heroine auger well for future adventures of Meredith and Markby.