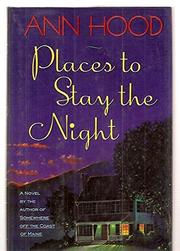 PLACES TO STAY THE NIGHT

One 36-year-old Massachusetts mother abandons her family for a career in show business, while another brings her daughter home to die—in a terribly earnest yet finally unsatisfying fifth novel by the author of Something Blue (1991), etc. Years ago, at their tiny Holly, Massachusetts, high school, Tom Harper was the handsome football star, Libby Holliday the slender blond princess, and Renata Handy the hulking, overweight laughingstock of the senior class. Now, 18 years later, Libby has become a dissatisfied housewife whose husband, Tom, owns the local garage—while Renata, who fled to N.Y.C. to become an artist, is a lonely unwed mother waiting tables in a Manhattan diner. Major changes come almost simultaneously to all three former classmates as Libby abruptly abandons Tom and their two rebellious teenaged kids to pursue a long-delayed acting career in Hollywood, while Renata learns that her eight-year-old daughter has a brain tumor that will probably kill her. When Renata returns to Holly determined to create the ``normal'' family life her daughter always craved, she finds a chastened, abandoned Tom waiting to fix her car. Inevitably, the two seek comfort in each other's arms, and their love affair, sad and passionless as it is, provides just the jolt needed to snap all three principals, as well as their children, out of the doldrums and back on their proper life-paths. Derivative characters, bland dialogue, and a predictable plot- -all subtract from this potentially affecting story.