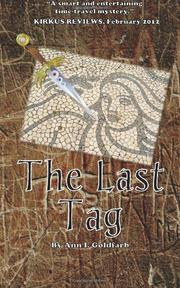 by Ann I. Goldfarb

After being transported to ancient Roman times, a young man must solve a young girl’s murder.

Life in Arizona isn’t so great for EB—his Dad is overworked, his mom lives in another state and doesn’t want to see him—so he spends his time tagging around the neighborhood. However, trouble starts when he encounters the ghost of a young girl in an abandoned house, and she begs him to solve the mystery of her murder. Unfortunately for EB, Aurelia’s murder took place in A.D. 78 in a Roman city near Pompeii called Herculaneum. Once he realizes he can’t ignore her request, he’s magically transported there. EB knows a little Latin from school, but he also knows that there’s only a limited amount of time before Mount Vesuvius erupts. As he meets various members of Aurelia’s family and their well-off Roman acquaintances, his graffiti skills come in handy: Leaving a message on a street wall helps him track down the culprit. The stakes get higher on a personal level when EB catches the eye of a young Roman girl from a prominent family that’s tied to Aurelia’s death; in turn, he makes an enemy of her brother. As EB begins putting the clues together, he has the genius idea to expose the murder in a very public fashion so that Aurelia’s family might be avenged and her ghost can find closure. The climax of the novel occurs during a remarkably tense scene at the Roman theater. Though readers must suspend disbelief that EB would fit into ancient Roman society so seamlessly, the novel moves along at a solid pace and the motivations for the murder are well-plotted. EB’s voice is charmingly youthful and acerbic, while also recalling the sharp observations of old film detectives.