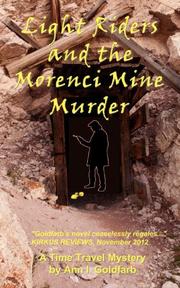 LIGHT RIDERS AND THE MORENCI MINE MURDER

by Ann I. Goldfarb

Ryn and his little sister, Aeden, squander their summer vacation helping clean out their late great-Auntie Zanne’s house. The two find an old box, marked with their names, that contains prisms and cryptic notes. The prisms, if arranged a certain way, can bend time, which the siblings confirm by landing decades in the past. But they don’t arrive together—Aeden finds an ally, and Ryn is caught up with a gang. As Ryn searches for his sister, everyone else looks for gold, and some are willing to kill for it. Goldfarb’s novel ceaselessly regales, enriched by two resilient and charismatic main characters. Most chapters alternate between Ryn’s and Aeden’s first-person perspectives, a technique that prolongs the suspense as the siblings spend most of the story apart. Some chapters present points of view from characters introduced along the way, including a murderer who wants a payout in gold. The siblings’ relationship is initially belligerent as they grumble over chores, but it progressively matures. Their love and respect for each other is more apparent when they’re separated. The humor is modest but shrewd. Few understand Ryn’s name; one person believes it’s short for Rendell and another finds it easier to call him Rin Tin Tin. And the kids-out-of-time jokes never sidetrack the narrative; people mock Ryn both for his sneakers (“fancy-dancy New York shoes”) and because he suggests rubbing two pieces of wood to start a fire, not realizing that matches are readily available. Goldfarb smartly keeps the time traveling at a minimum to subvert any skepticism. Perhaps the author’s greatest feat is an effective multigenre approach of murder mystery, horror, sci-fi, and Ryn’s trekking via horseback even recalls a Western.

Droll and diverting; fine characters to follow through time.