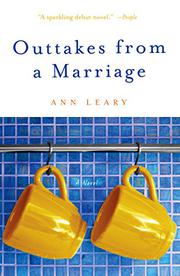 OUTTAKES FROM A MARRIAGE

How does a free spirit turned wife and mother cope with her actor husband's infidelity? According to this debut novel from memoirist Leary (An Innocent, a Broad, 2004), with tears, irreverent humor and, ultimately, a reaffirmed sense of self.

Julia Ferraro’s husband Joe has been nominated for a Golden Globe for best actor in a TV series. Weeks before the ceremony, Julia innocently uses Joe's phone to check her messages and punches in his code by mistake. The raunchy, suggestive message she hears sends her near-perfect world into a tailspin. After struggling for years, Joe is now a household name. Julia and he have two young children, Ruby and Sammy, and share a spacious pre-war apartment on the Upper West Side. It's a far cry from the early days of their courtship and marriage, when Julia was the fun-loving breadwinner and Joe was an “awkward, shy, borderline dork” whom Julia “taught to drive a stick shift and to shoot pool and, really, how to dress.” Now she is obsessed with discovering the identity of the young woman with “that fresh, foul purr.” A girl who once threw wild parties, Julia now balances Joe’s celebrity with gentle barbs and copes with such demands as Sammy’s status-driven preschool. (The lampooning of Sammy’s Multicultural Montessori School is the funniest part of the book.) As the Golden Globes near, Julia plunges into a maelstrom of insecurities about her marriage, her parenting skills and her weight, and she struggles to steer a course between pushover and avenging First Wife. The outcome is satisfying without being sappy.

A witty take on marital survival in Manhattan—with heart.