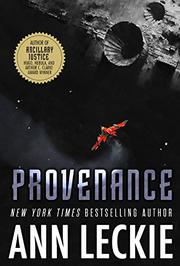 A woman seeking the approval of her foster mother takes a desperate gamble and finds herself in the middle of an interplanetary conspiracy.

To help her foster mother, Netano, shame a political rival, Ingray Aughskold of the planet Hwae bribes a broker to smuggle the notorious Pahlad Budrakim out of prison, hoping that Pahlad will reveal the location of the valuable family antiques e stole. (Pahlad is a “neman,” a gender using the pronouns e/eir/em.) This supposedly simple plan soon gets complicated thanks to Ingray's scheming foster brother, Danach, a neighboring planetary government that frames Pahlad for murder, an alien ambassador with a persistent interest in Ingray and her associates...and the fact that Pahlad never stole the antiques in the first place. Setting her new novel in the same universe as her previous books (Ancillary Mercy, 2015, etc.), Leckie again uses large-scale worldbuilding to tell a deeply personal story—in this case, to explore what binds children to their families. As always, she impels the reader to consider the power language, and specifically names, has to shape perception and reality. The title is meaningful in several senses. "Provenance" initially refers to vestiges, the antiques so highly valued on Hwae, many of which are probably fakes; but more importantly, it means the struggle to understand where people come from and how it made them what they are, how they will define themselves now, and what labels they will choose to bear going forward. In aid of that point, a deeper look into the relationship between Ingray and Netano might have strengthened the book, and so might evidence of Danach’s much-discussed political ability—all we see from him are smugness and petulance, while Ingray demonstrates far more political adeptness. But since the novel is told from Ingray’s perspective, which is that of a woman with poor self-esteem discovering her confidence and true worth, Danach may not have been all that brilliant to begin with.