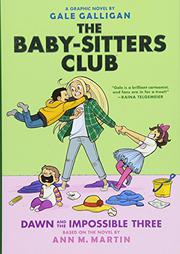 DAWN AND THE IMPOSSIBLE THREE

From the BSC Graphix series, volume 5

In the fifth installment of the graphic adaptation of the beloved series, one of the members of the Baby-Sitters Club copes with a family that’s struggling through an acrimonious divorce.

Dawn Schafer, white and a recent transplant from California, is the newest member of the club. Her mother is dating fellow member Mary Anne’s father, and Kristy, their club president, is jealous of Mary Anne and Dawn’s new bond. When Dawn begins to sit for a new family—the Barretts—she is immediately struck by their household’s general disorder and rambunctious kids. She learns that the Barretts are in the midst of a tempestuous separation, and their growing rancor soon has serious implications for the entire family and Dawn. After a harrowing event, Dawn must confront Mrs. Barrett and voice her concerns despite her apprehension at broaching such a difficult topic with an adult. Slightly more serious than its predecessors, this offering tackles the weighty issues of divorce and kidnapping but manages to resolve things tidily in the comfortably episodic manner that fans of the series expect. This volume introduces new artist Galligan, who replaces veteran Raina Telgemeier. Although Galligan’s style is subtly different than Telgemeier’s, fans should not be alienated by the smooth transition. In her full-color panels, the principal characters appear to be white, save Asian club member Claudia.

A worthy addition to the series, albeit a bit more somber than its forerunners.