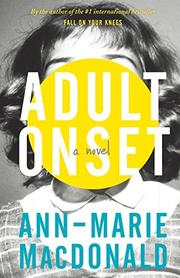 Assaulted by mysterious pains and bracketed by painful childhood memories, Mary Rose MacKinnon engages in power struggles with her willful toddler and endures the stresses of stay-at-home parenting while her partner, Hilary, is out of town.

An acclaimed young-adult novelist, Mary Rose is suffering from severe writer’s block, unable to complete the third volume in her popular series. Despite the surface comforts of life in her liberal, upper-middle-class Toronto enclave, she feels an inexplicable sense of alienation from her environment; she distances herself from the other mothers at her child’s preschool and avoids communication with her own parents, despite their belated acceptance of her homosexuality and loving acceptance of Hilary and their grandchildren. When Mary Rose’s charming Lebanese mother, Dolly, was younger, she had numerous miscarriages, stillbirths and babies who died shortly after birth, and she seems to be fixating on this tragic period many decades later. The effect of this sad legacy on family dynamics has never been fully explored, and Mary Rose has many vague, unspoken questions about her own childhood, the answers to which might help explain her emotional paralysis and phantom arm pains, as well as the mysterious bone cysts she suffered as a young girl. MacDonald (The Way the Crow Flies, 2004, etc.) integrates three narratives into this novel—Mary Rose’s mundane day-to-day existence, Dolly’s experience of severe depression as a young mother lamenting her lost babies, and Mary Rose’s novels, which parallel elements of her own family story distorted through the lens of teen fantasy fiction. While clever, the novel within the novel seems a bit forced. There is a recurring theme of impostors and doppelgängers and a shrewd twinning motif, but the reader is always conscious of the writer’s craft. Of the three, Dolly’s story is the most naturalistically and sensitively portrayed.

Despite the too-neat Freudian implications of Mary Rose’s story, this is an affecting, multilayered account of domestic ennui and the painful effects of long-held secrets on three generations.