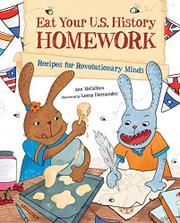 After encouraging kids to eat their math and science homework (2011 and 2014), McCallum and Hernandez this time pair six recipes to the history of America from 1620 to 1789.

The historical highlights include the Mayflower, the Pilgrims, Plymouth, and the first Thanksgiving (Thanksgiving Succotash); life in the original 13 Colonies (Colonial Cherry-Berry Grunt); the French and Indian War (Lost Bread); slavery (Southern Plantation Hoe Cakes); the Boston Tea Party and the increasing enmity toward England (Revolutionary Honey-Jumble Cookies); and the Declaration of Independence and the Revolutionary War (Independence Ice Cream). Each period is summarized in a single page of general background. The recipe follows on a double-page spread, and then a further double-page spread gives more (and more specific) information. An introduction includes a timeline of the entire period and some cooking tips (“Please ask an adult to assist you, especially when things are sharp or hot”), which include pointing out that the recipes have been modernized. The book ends with a brief review of each period, glossary, and index. The cutesy cartoon artwork visually represents some aspect(s) of the learning and goes nicely with some of the corny puns the author adds in. The recipes themselves include pretty basic ingredients, and the steps are easy to follow…provided readers know what to do when it says to “beat,” “whip,” etc.

Social studies teachers aren’t likely to assign these for homework, but some could easily be made in class to finish off Colonial studies.