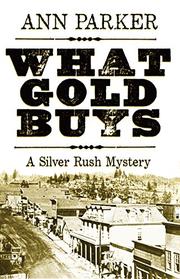 A feuding couple returns to Colorado only to become embroiled in several murders.

Mark and Inez Stannert own the Silver Queen Saloon together with Abe Jackson, whom Mark has known since the Civil War. The couple has just come home to Leadville from an extended trip to Inez’s relatives in Manitou Springs. After Mark vanished for more than a year, Inez had started divorce proceedings, which are currently on hold. But she took a lover in Mark’s absence, and the Rev. Justice B. Sands is still first in her heart. While visiting Abe’s very pregnant wife, Angel, Inez meets Madame Drina Grizzi, a fortuneteller visiting Mrs. Alexander, the local undertaker’s wife. When Drina is found strangled with fancy corset laces, Inez is drawn into the mystery of her murder because she recognizes the laces—which were sold in her saloon by a drummer specializing in fancy ladies’ unmentionables who’s shortly found dead himself—and because she’s met Drina’s daughter, Antonia, who’s posing as a newsboy called Tony. Tony had tried to shoot Brown, one of the English remittance men who patronize the Silver Queen, thinking he’s the same Brown who Drina always claimed was coming to rescue them from poverty. Inez tries to hide Tony, dressed as a girl, with a friend, but she insists on going to work for the undertaker in hopes of finding her mother’s vanished body. The town is filled with rumors concerning doctors who steal bodies to dissect them, the Reverend’s behavior, and the possibility that the Englishman Brown's promising claim may actually be worthless. While Mark tries every trick in the book to keep Inez from divorcing him, she attempts to hunt down a killer while agonizing over the difficult decision she must make.

Once again, the fifth from Parker (Iron Ties, 2013, etc.) is much better history than mystery, drawing the reader into the stunning beauty and harsh realities of life in 1880s Colorado.