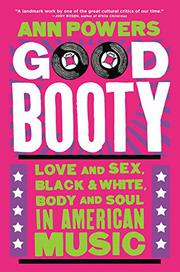 Love and Sex, Black and White, Body and Soul in American Music

Forget drugs: sex and rock & roll are where it’s at in this survey of the devil’s music and its carnal dimensions.

NPR music critic Powers (Weird Like Us: My Bohemian America, 2000, etc.) opens on a political note, observing, “America’s erotic drive emerged as inseparable from the fact of its troubled multiculturalism.” Take it as a given that nations have “erotic drives” and that any discussion of “American bodies” requires us to acknowledge “the legacy of gross inequality that begins in the enslavement of Africans.” The author then settles into her occasionally diffuse narrative that connects Congo Square to Beyoncé and bemoans the devolution of Ma Rainey’s bawdy to the pornified, auto-tuned hip-hop of today. Where Powers successfully connects the dots, light bulbs flash: it is fascinating to watch her join the gay subculture of disco to the success of the sisters Labelle, nee the Blue Bells, remade in “a previously unexplored space where glam met funk met soul via strictly female interplay.” (Well, perhaps not strictly female, since, as Powers notes, the designer of Labelle’s outrageously flamboyant costumes went on to invent the costumes of the swaggering cartoon band KISS.) Even where she does not successfully make those connections, as with her notes on the apache (“pronounced A-POSH, not like the Native American tribal name”) dance and its not-so-subtle masochism, which never quite caught on in the larger culture, she ventures interesting theses. Mostly, the author strings together bright tidbits of cultural trivia to reconstruct and deconstruct the kinship of dirty blues and gospel, the shared underage girlfriends of now-iconic British rock stars, and other points of prurient interest.

A mixed bag, sometimes entertaining, sometimes arid, but full of useful insights; readers won’t look at Lady Gaga or Nicki Minaj the same way after considering them among the “cartoonish card deck of sexualized female archetypes” that constitutes so much of the present pop scene.