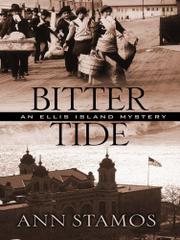 A superintendent and a matron of Ellis Island bring justice to the huddled masses in this debut for Stamos, pseudonym for Takis and Judy Iakovou, a husband-and-wife team based in Georgia.

New York City in 1901 is evidently an ethnic parade of fighting Italians, stage Irish and upstanding WASPs. Joseph Hannegan, Superintendent of Ellis Island and “the only honest Irishman in New York,” fights an uphill battle against extortion and bribery. When Maggie Flynn walks off the gangplank and shoots a fellow immigrant, the case, a political hot potato, falls into his lap. Hannegan is aided by Rachel Bonner, a scion of one of New York’s finest families, who has given up her place in the social register to help new immigrants assimilate. But they’re hampered by the disappearance of the body and Maggie’s stubborn silence. When the corpse washes up on shore, Hannegan realizes that Maggie’s shots were staged, not fatal, and that the real killer is still at large. All the clues point to the dead man’s involvement with the Irish rebel group Clan na Gael, the beloved cause of Hannegan’s father and the men of his old neighborhood. Despite the romantic frisson between the two sleuths, Hannegan must defend his community from Rachel’s well-meaning condescension while still putting America first. Their hunt leads from a society ball at the Yacht Club to a pub where Tammany Hall deals are struck, and eventually to the heart of the Irish-American community, the core of the immigrant dilemma.

A heavy-handed civics lesson thinly disguised as a mystery.