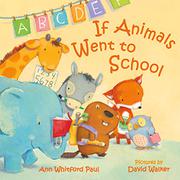 IF ANIMALS WENT TO SCHOOL

From the If Animals series

Paul and Walker continue their If Animals series with this look at animals attending school.

Just what would an all-animal school look like? How would students and teachers behave? Previous series outings each had their strengths and weaknesses, and this one, unfortunately, seems to combine all of the latter. While the array of fauna is a plus, the students are just labeled with the adult name—Beaver, Lemming, etc.—missing the opportunity to teach kids the names for animal young that made If Animals Kissed Good Night (2008) stand out. Worse, though, is the fact that many of the animals don’t stand out as exemplifying their behaviors, instead merely highlighting what happens at school: Elephant stacks cardboard blocks in a tower, Mouse plays with shapes, Bear “hog[s] the triangles,” and Beaver is the reluctant student whose parent drags him to school. “Fox would rush to the story nook, / and bark-bark, ‘Goat! Stop eating that book.’ ” Well, at least Goat is doing what goats often do, even if Fox is acting a lot more like a herd dog than a predator. Onomatopoeia is emphasized throughout, and young listeners will likely enjoy chiming in on the sound effects, though the rhythm and rhyme are inconsistent. Walker’s illustrations are softly colored and delightfully adorable.

Lacking the perfect pairings of animal and behavior, this one just doesn’t stand out.