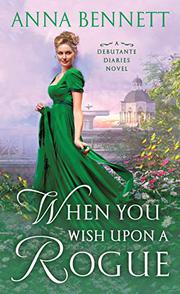 WHEN YOU WISH UPON A ROGUE

A debutante finds her match at last—after she is betrothed to another.

The last of a trio of debutantes is about to find herself off the marriage market, much to her dismay. Sophie Kendall is to be betrothed in two months to Lord Singleton, an inoffensive man she has no interest in but must marry to settle her father’s debts. This means she'll no longer be leading the clandestine meetings of the Debutante Underground, an “eclectic group of women” from all walks of life who meet to discuss “sensitive topics such as courting, desire, intimacy, and love.” It also means she shouldn’t take any interest in Henry Reese, the Earl of Warshire, whom she’s just met in her quest to find a new meeting spot for the group. But Henry is desperate to get to know Sophie better after he learns that her tea, and her presence, is so soothing to him that he's able to get a good night’s sleep despite his persistent PTSD. In exchange for the use of his space for her group, she agrees to spend one chaste night with him each week, insisting that they aren’t to touch each other at all. But her strict boundaries are no match for their attraction, and she is soon regretting her imminent engagement, which will mean the end of all the relationships that are important to her—unless she calls it off, ruining her family. Sophie’s prohibition against physical touch adds a heightened chemistry to the scenes of intimacy between her and Henry, which build nicely in intensity throughout the story. Sophie’s freedom to leave her house overnight without any chaperone feels awfully contemporary, but Bennett provides an explanation plausible enough to let the fun continue. Readers who love a grumpy-to-smitten hero will swoon for Henry, and his PTSD is sensitively handled, if a bit simplistic.

A straightforward and charming Regency romance with a pleasing horticultural bent to set it apart.