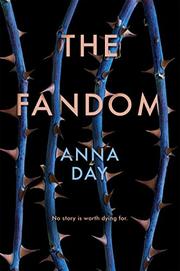 Cosplay turns all too real for four English teens.

Violet, her besties Alice and Katie, and her younger brother, Nate, attended London’s Comic-Con as rabid fans of The Gallows Dance, the hit YA franchise. But after a freak event transports them into its fictional world, they realize that futuristic dystopias aren’t as much fun as you’d think. To return home, Violet must become the story’s heroine: She has one week to ensnare the dreamy hero, spark a revolution…and die tragically. The hackneyed premise offers plentiful satiric possibilities, notably in frequent jabs at genre tropes and constant allusions to pop culture. Unfortunately, this title tries to have it both ways; The Gallows Dance—endlessly quoted and recapped—appears mawkish and trite yet is presented as genuinely thrilling and oh-so-romantic. Pathologically insecure Violet seems a caricature of both the stereotypical fangirl and the Mary Sue heroine. Her relationships with skeptical Katie and nerdy Nate are charmingly authentic, unlike her toxic “friendship” with shallow Alice. While these main characters are all white, the alternate world’s impossibly dishy love interests and ludicrously evil villains do hint at London’s ethnic diversity. Alas, even Violet’s repetitive countdown to her own death provides little suspense, as the predictable plot twists to an epilogue brim full of blatant sequel bait.

Genre fans and haters alike will be irritated and bored.