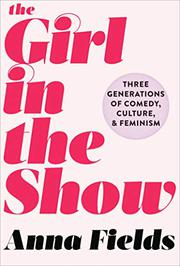 THE GIRL IN THE SHOW

The struggle to do stand-up comedy while female.

Journalist, producer, and documentarian Fields (Confessions of a Rebel Debutante, 2010) interviewed dozens of female comedians—or what she calls “comedienne-ballerinas,” a term Phyllis Diller coined in 1986—to create this informative, timely, occasionally pedantic work about feminism and women in comedy. Charlie Chaplin famously said, “all you need to make a movie is a park, a policeman, and a pretty girl,” underscoring the age-old notion that women performers could be pretty but not funny. Indeed, women in Vaudeville burlesque would usually be depicted by men in drag. However, generations of American women since Lucille Ball and Elaine May have exploded that notion (the author sticks to American comedy), and Fields doggedly pursues these pioneers, from the crucial early influences (Moms Mabley, Sophie Tucker, Diller, and Ball, among others) to the lively current crop of active female comedians—Amy Schumer, Mindy Kaling, and others. What drives these women to expose themselves to ridicule by men, especially, or to endure the “two a night” rule (only two women comics onstage per night)? One primary reason is to support a family, as Diller had to do when her husband was out of work and she had six children to raise. Fields focuses on certain elements of stand-up comedy, as embraced by women—e.g., how to talk “blue” (about sex) and about “women’s issues” like abortion and menstruation that make men “queasy.” Should women comics pander to sexist stereotypes or challenge them? Ball was the first to use the experience of women’s everyday life to fill her shows as well as demonstrate the strong bond (rather than rivalry) between women friends (Lucy and Ethel); this dynamic would be replicated to enormous success in TV shows from Maude to Saturday Night Live. Despite some preachy passages about feminism, Fields provides a useful history and handbook for aspiring comics.

A solid but not groundbreaking chronicle of women’s long, excruciating fights for laughs.