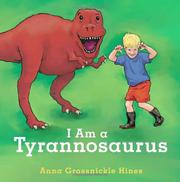 I AM A TYRANNOSAURUS

Second time’s also a charm for this close cousin to I Am a Backhoe (2010).

In this iteration it’s a blond, rather than dark-haired, lad imagining himself—and posing expressively in the digitally drawn and painted pictures—as a sequence of dinosaurs. He pretends to be five named dinos and a hatchling in succession before his mother (rather than father, as previously) appears. (The dinos represented are, in addition to the titular T. Rex, velociraptor, brachiosaurus, triceratops and pteranodon.) He dubs his mother “Maiasaurus” (“That means… / good mother lizard,” the child explains) before cuddling into her lap. Featuring realistic, sharply defined figures of boy and dinosaurs floating above rich washes of color, the art reflects both the imaginative play’s exuberance and the narrative’s patterned simplicity: “I’m not so big, with a stiff tail and little wings, but I run fast and leap, leap, leap. I am… / a velociraptor.”

Not exactly a creative leap, leap, leap for Hines, but a broadly popular topic enhanced with light brushes of fact, wrapped in family warmth and presented in a comfortably formulaic way. (Picture book. 2-6)