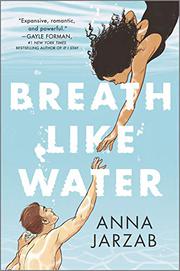 When swimming is everything, what’s left when your life doesn’t go according to plan?

A world champion swimmer at 14, Susannah Ramos’ changing body has betrayed her; she struggles to maintain her edge in the pool just two years later. Now, a manipulative coach and crippling self-doubt feel like insurmountable hurdles as Susannah fights to regain both her self-confidence and a spot in the upcoming Olympic Trials. A handsome newcomer to the team turns into more than just a friend, and Susannah must rethink her priorities as she works to regain her elite athlete status. Blossoming romance is soon challenged by pressures from the swim team and difficult secrets coming to light. Jarzab expertly captures the intense pressures of high-stakes athletic competition and the complicated reality of loving someone with mental health struggles. Susannah’s family’s Mexican American heritage is significant to the plot, and themes of identity and feeling like an outsider in a predominantly white sport are explored authentically. Susannah is third-generation Mexican American and growing up in suburban Illinois. Readers will root for Susannah in her journey to find her place, both in and out of the pool.

Racing action and tender romance shine in a story of hard love and harder competition.