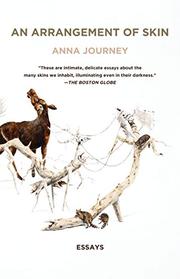 AN ARRANGEMENT OF SKIN

In “Modifying the Badger,” about the author’s transforming a badger into a raccoon via taxidermy, she discusses C.D. Wright’s poem “Personals” and how, “through accumulation and refraction, Wright’s slivers of personal history…expand into a larger social matrix.” So do Journey’s essays, many of which are autobiographical. Each piece is like a “sliver” of a photo album in which we observe the author’s grandparents, parents, sister, friends, and boyfriends. Sometimes it’s not pretty, like when she writes about calling a suicide hotline or when she describes herself and her best friend burning their arms with the ends of cigarettes. There are many secrets in closets, and there’s also glorious prose, beautiful images and metaphors composed by a fine poet. In “A Common Skin,” about how a rider and horse “share a common skin,” she describes her rigid calf muscles as “dried corncobs,” her heels hanging down, “hard as rubber.” Many of the titles are poetic: “Epithalamium with Skunk Pigs,” “A Flicker of Animal, a Flank” and “Prologue as Part of the Body.” Readers will learn intriguing tidbits along the way—e.g., how to stuff a starling, that “taxidermy is about life, not death,” how to be a potter, give a tattoo. We also visit interesting places, like dusty Deyrolle, part Parisian taxidermy shop, part museum of oddities, and Los Angeles’ Museum of Death, home to the preserved head of the vicious serial killer Henri Désiré Landru. These elegant essays are sometimes-bewitching meditations and musings: a “unique mixture of pathos and humor, revelation and concealment, banality and wonder.”

Even though they get a bit precious at times and sometimes lose their way, the essays always come together “to resurrect and walk.”