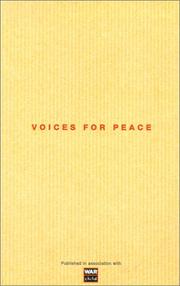 Drawn from peace activists, students of Islamic studies, artists, and the general intelligentsia—a majority from the UK—these 40 essayists address the issues that never disappear once the bombing stops: the wellsprings of terrorism that must be approached and dealt with for a lasting peace. There is a modest amount of snideness about collateral damage and the buffoonery of George Bush that feels rather pointless, especially considering the reasoned responses suggested by the majority of writers. These authors ask readers to look a bit deeper, into the mean realities of poverty, injustice, and political oppression—not just in Afghanistan but globally, and not least in the US. They advocate being heedful of ancient enmities and the proliferation of arms (including nuclear and biological), castigate a media bent on spectacle rather than on understanding, recognize the pathetic circumstances of refugees, speak against self-serving morality and isolationism. Some try to get a military response into perspective—how does one fight the “asymmetrical warfare” of the terrorist?—while others, like Edward Said, examine the fallout against Arab people in general (Said uses the Israeli military responses against the Palestinian population as an example writ large) and the distractions generated by zealots: “What is especially bad about all terror is when it is attached to religious and political abstractions and reductive myths that keep veering away from history and sense.” Less helpful are comments like Martin Bell’s remark that peace and freedom “are not a right but a privilege.” Certainly they are a deserved right for everyone, even if they must be fought for and protected once attained.

Breaths of restraint amid the war whoops, and a sense of hope that understanding the roots of the problem rather than scorching the earth is the path to a durable peace.