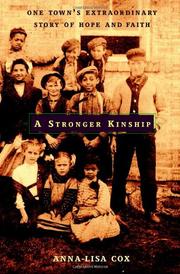 A gladdening, unsentimental chronicle of a Midwestern town that practiced racial equality against all late-19th-century odds.

The town was Covert, Mich. “Starting in the 1860s the people of this place broke both laws and social expectations to develop a community of radical equality,” writes Cox, scholar in residence at Chicago’s Newberry Library. Though it was very much an abolitionist community, Covert was not a utopian experiment, the author makes plain. Yankees from Massachusetts, free black farmers from North Carolina, deeply accented Europeans, Native Americans and black frontier folk born and raised in the Midwest all gathered there to promote the idea that a vibrant community should tap the strengths of all its citizens. A series of small yet profound acts had big consequences. For example, a black man ran for elective office when it was still a crime, and a largely white electorate voted him in because he was the right person for the job. Working from local records, newspapers and personal reflections, Cox credits the town’s integrated success to the most prosaic of reasons: Its residents were more interested in thriving economically than in expending energy on efforts to promote racism. “Covert’s unusual culture not only blossomed but bore good harvest, while the rest of the nation saw the meager fruits of Reconstruction wither on the vine,” the author notes. Still, it was never entirely about economic self-interest; Covertites were well aware of their anti-establishmentarianism and pursued it with thumb-nosing disregard for the bigotry in which the Midwest trafficked with gusto during the second half of the 19th century. After 50 years of going its own way, the town fell victim to changing demographics; as the graybeards died off, ignorance wheedled its way into the town’s fabric, and Covert’s rare time faded.

Covert well deserves the limelight thrown by Cox as a grand example of decency and defiance of Jim Crow’s gathering venality.