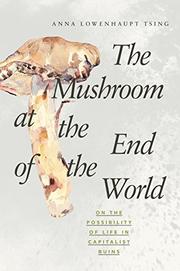 THE MUSHROOM AT THE END OF THE WORLD

On the Possibility of Life in Capitalist Ruins

An unusually rewarding meditation on how a wild mushroom can help us see the world’s ruined condition after the advent of modern capitalism.

The matsutake—a beloved species of mushroom that fetches high prices in Japan—is a survivor that grows inches below ground in deeply human-disturbed forests. Difficult to find and impossible to cultivate, it is said to have been the first living thing to emerge from the devastated landscape of Hiroshima. Bursting with ideas and observations, Tsing’s (Anthropology/Univ. of California, Santa Cruz; Friction: An Ethnography of Global Connection, 2004, etc.) highly original ethnographic study follows this spicy-smelling mushroom’s global commodity chain, from the forests of Oregon’s Cascade Mountains and elsewhere to Tokyo auction markets. She recounts her interviews with mushroom pickers, scientists, and entrepreneurs in the United States, Asia, and elsewhere to explore the matsutake’s commerce and ecology. “We are stuck with the problem of living despite economic and ecological ruination,” she writes. “Neither tales of progress nor of ruin tell us how to think about collaborative survival. It is time to pay attention to mushroom picking. Not that this will save us—but it might open our imaginations.” In prose that is both scholarly and deeply personal, Tsing shows how the matsutake, emblematic of survival amid changing circumstances, thrives in transformative collaboration with trees and other species and points the way toward coexisting with environmental disturbance (“the uncontrolled lives of mushrooms are a gift—and a guide—when the controlled world we thought we had fails”). The author covers a staggering array of topics, from freedom, foraging, and forestry to DNA research and the music of John Cage. Consistently fascinating, her story of the picking and selling of this wild mushroom becomes a wonderful window on contemporary life.

Serious readers will delight in these pages.