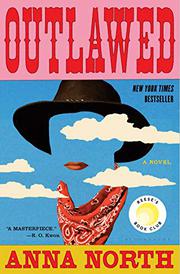 A young woman in an alternate version of the 1890s American West joins a gang of outlaws.

Ada is just a teenager living in the Independent Town of Fairchild when she’s married off and expected to start a family with her new husband. The daughter of the town’s midwife, Ada knows just about all there is to know about childbirth and childbearing—except the reasons behind the failure to conceive, the worst fate that can befall a woman in her society. (The standard punishment for a “barren” woman is to be hanged as a witch.) When she herself cannot get pregnant, Ada must leave her mother and young sisters behind, first fleeing to a convent. Then, when she becomes dissatisfied by the limitations to her learning that convent life dictates, she is directed by the Mother Superior to the Hole in the Wall Gang. Well known as robbers in “the territories,” the gang is led by the mysterious Kid, a figure said to be as “tall as a pine tree and as strong as a grizzly bear.” But when Ada is secreted to their hideout, she finds none of the outlaws, least of all the Kid, are what they seem. North has smashed two unlikely genres together here: the dystopian alternate history and the Western. Calling it The Handmaid’s Tale crossed with Butch Cassidy and the Sundance Kid goes some way to describe the novel’s memorable world, but it is also wholly its own. It earns its place in the growing canon of fiction that subverts the Western genre by giving voice to the true complexity of gender and sexual expression, as well as race relations, that has previously been pushed to the margins of traditional cowboy or westward expansion tales.

A genre- (and gender-) bending take on the classic Western.