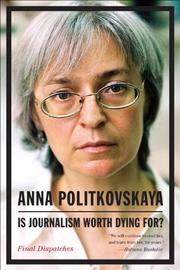 IS JOURNALISM WORTH DYING FOR?

“It is generally accepted that we Russians do not like ourselves much.” So wrote the late Politkovskaya (1958–2006) (Putin’s Russia, 2006, etc.), who paid with her life for her daring critiques of post-Soviet society.

This spirited collection, originally published by the journal Novaya Gazeta in 2007, opens with a self-interview taken from the journalist’s laptop after her death. In it, she accuses most of her journalistic colleagues in Russia with being koverny, or clowns, “whose job it is to keep the public entertained and, if they do have to write about anything serious, then merely to tell everyone how wonderful the Pyramid of Power is in all its manifestations.” The big-shoe phenomenon spreads far beyond Russia, of course, and Politkovskaya is not alone when she asks what the fate of those who refuse to play in the Big Top is—“They become pariahs,” she answers, though in her case it was worse still. Much of the collection concerns Russia’s war in Chechnya, which has quieted down since, but, only a few years ago, was raging—no thanks to orchestrated atrocities on the part of the Russian Army that Politkovskaya covered and uncovered. One was the so-called Shatoy Tragedy, in which Russian soldiers under the command of the Central Intelligence Directorate killed six Chechen civilians and burned their bodies. Politkovskaya’s reportage is far from objective, in the vaunted Anglo-American sense. Her ledes build around terms such as “massive violation of human rights” and “the racketeering that pervades the Republic,” recounting the misdeeds of plutocrats and bureaucrats, and otherwise offering news and commentary from what she called “the furthest end of the Old World.” Even the less pointed touches—travel notes from Europe and Australia, a brief memoir of living with an elderly dog—are sharp in their none-too-veiled view of a society that should be better than it is. An essential book for budding Russia hands, followers of world events and fans of good journalism.