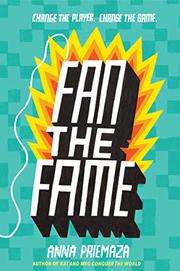 Content creators strive for subscribers at a Canadian gaming con.

Newly minted gamer-girl celebrity 18-year-old ShadowWillow is building her brand by capitalizing on her rumored relationship with 21-year-old Code of YouTube Team Meister fame. Seventeen-year-old Lainey—Code’s sister and put-upon roadie—intends to reform her brother by revealing his off-camera racism and sexism—even if that reformation involves destroying his career—while also getting closer to sad-sack love interest LumberLegs. Overflowing with righteous indignation, Lainey wants to fight “rape culture and misogyny” but seems oblivious to collateral damage. Finding solace in online gaming, 15-year-old SamTheBrave—overweight and embarrassed by his dermatillomania—wants to share his fledgling stream with Code at LotSCON but discovers bullies are everywhere and heroes are rare. In contrast to the established digital demigods, Sam displays the most genuine geeky passion. A comic/gaming convention is a temporary, isolated, and intense world, but this fictionalized Blizzard-like con seems unmoored from both reality and fandom. Priemaza revisits Legends of the Stone from Kat and Meg Conquer the World (2017) to discourse on sexism in gaming (through the much-too-eloquent Lainey) and doggedly dissect how to gain internet fame but offers little in the way of frivolous fun. Most characters are white, and whiteness in the gaming world is called out.

Celebrity has never felt so calculated.