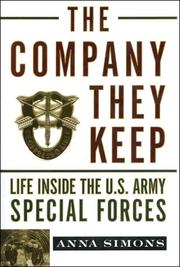 THE COMPANY THEY KEEP

An anthropologist audits the US Army's Special Forces with the analytic rigor and vigor she would apply to any intriguing, albeit alien, culture in her sights. UCLA professor Simons (who married a Special Forces soldier she met while doing fieldwork in Somalia during the late 1980s) offers a cool, corrective briefing on an elite branch of America's military, which (owing mainly to Hollywood hype and sensation- seeking journalists) has an at best ambiguous image. Drawing on the apparently open access she was afforded to an SF battalion stationed at Fort Bragg, N.C., the author provides a quick and dirty history of America's modern involvement in unconventional warfare. She stresses that behind-the-lines operations are but one aspect of the SF's largely clandestine missions; in addition to direct action (ambushes, hit-and-run raids, sabotage), they encompass assisting foreign governments in establishing defenses against subversion or insurgency, the tutoring of indigenous irregulars or their state-supported counterparts, and reconnaissance. Employing unit designations and names of her own devising, Simons delivers a detailed picture of how SF soldiers train for low-intensity conflicts, intelligence-gathering, and instruction assignments in offshore venues. Noting that all SF endeavors place a premium on cooperation, she puts paid to any notion that such outfits welcome rugged individualists, let alone Rambo types. Covered as well are the divisions of labor within a 12-man A-team (the basic SF unit), the motivations of NCOs who make a career of the Special Forces, the constant competition for good duty, and the role of shock troops (Rangers or paratroopers) compared with the use of an ultraflexible, ``impressively low- tech'' detachment with the capacity to hold remote territories for long periods. An offbeat but consistently absorbing assessment of an unorthodox military organization that has experienced periodic difficulties in living down (or up to) its press clippings.