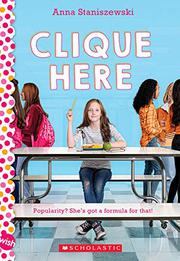 From the Wish series

Science-crazy seventh grader Lily Blake Cooper hopes that transferring to a new middle school will transform her from nerdy geek to social butterfly.

At Lily’s old school, mean girl Courtenay and her bevy made her life hell; looks and money seemed to be all that mattered. Before embarking on a fresh start, Lily devises a science experiment to try to solve the mystery of middle school popularity. However, science turns out not to be the ideal tool for making these life changes. Deciding to go by Blake and improving her wardrobe help, but the new school turns out to have plenty of pitfalls of its own. The coveted science club is superserious and less fun than the kitchen science Lily loves, not to mention that here the science-y kids rule, looking down on those who are less successful academically. A series of messy pranks target Lily and her classmates, and eventually a cruel prank which is hard to recover from socially is played on her. Although the characters tend toward two-dimensionality, the swiftly paced, first-person narrative keeps readers engaged, and the message that putting others down is wrong, no matter the reason, is valuable. Lily’s social awkwardness and lack of confidence will resonate with many tweens. Her growing ability to deal with whatever life throws at her is relatable and engaging. Most characters present White.

Shows readers that being kind is more important than belonging to the right clique.