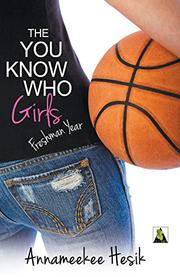 THE YOU KNOW WHO GIRLS

Just before their freshman year at Gila High, Abbey and her best friend, Kate, are warned by Kate's older sister, Jenn, that the basketball team is full of “lezzies.”

Despite promising Kate that she “will never try out for basketball or be friends with those you-know-who girls,” Abbey starts the year secretly crushed out on a girl she meets at a food court and is quickly scooped up by Garrett and Stef, sophomore basketball players and out lesbians. She soon learns about Gila High's tangled web of lesbian relationships, including Stef's involvement with Keeta, Abbey's increasingly flirtatious crush. Over the first few months of the year, Abbey joins the junior varsity basketball team and becomes involved with Keeta behind Stef's back, despite her new friends' warnings that Keeta is bad news. Abbey's well-rendered narrative voice easily conveys the joy of discovering new friends and the deliciousness of illicit kisses, as well as her fears about her old friends and her mom finding out. The cast, appropriately for the Tuscon setting, is ethnically diverse, and Keeta's frequent Spanglish comes across as dreamy without being exoticized. The story isn't completely polished—for instance, Abbey once recalls an incident that doesn't actually appear in the text.

However, its warmth and enthusiasm more than make up for its small oversights.