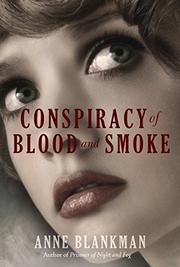 CONSPIRACY OF BLOOD AND SMOKE

A former intimate of Adolf Hitler returns to prewar Germany to save her beloved, all while fighting the rising power of the Nazi Party.

In this sequel to Prisoner of Night and Fog (2014), 18-year-old Gretchen returns to her native land in 1933, as the Nazis become ever more firmly entrenched in German politics. Gretchen and her Jewish beau, Daniel, seek the truth about the (real-life) Reichstag fire in order to discredit Hitler and the National Socialists. If only they can prove Hitler is lying about the arsonists, surely they can prevent him from gaining a stranglehold on German politics. The tight interweaving of Gretchen's journey with historical events lends a sense of the genuine—and results in the fascinating experience of following a quest readers know is doomed to fail. As Gretchen winds ever closer to the inevitable confrontation with her formerly loving "Uncle Dolf," it becomes increasingly unclear what she can salvage from the rising horror of Nazism. Mixed in with the bleak reality are adventure-novel goodies to maintain the pace: organized crime, prostitution and cocaine. Gretchen's too inwardly focused to see danger in Hitler's rise beyond the risk to herself and her friends, but Daniel provides rare if vital perspective.