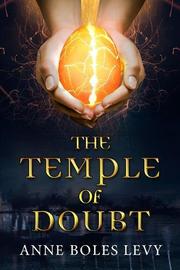 THE TEMPLE OF DOUBT

From the Temple of Doubt series, volume 1

Living in Port Sapphire, on the island of New Meridian in the world of Kuldor, almost-16-year-old Hadara chafes under the tenets of a religion headed by the god Nihil that teaches that magic is superior to anything in nature. Since Hadara and her mother continue the passed-down-in-the-female-line family business of concocting healing potions from plants, the two are regarded with suspicion even as their services are sought out by townspeople. When an object falls from the sky into the marsh, Azwans (mages of Nihil) and their oversized Feroxi guards arrive to investigate, complicating things for Hadara and her family, not least because Hadara begins to have feelings for one of the guards. Although Hadara is a delightfully pert narrator, the story’s foremost tension—her subversive doubt of Nihil’s tenets—fails to reach its full potential because the religious concepts are not convincingly clear enough to weave themselves inextricably into the story. Levy shines brightest in her potent descriptions of settings and her imaginative scenes. Continuity, however, is a recurring problem. Among other lapses, the first two chapters seem to be two separate beginnings.