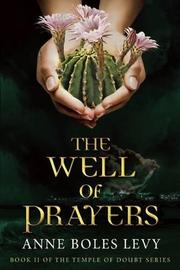 THE WELL OF PRAYERS

From the Temple of Doubt series, volume 2

The sequel to The Temple of Doubt (2015) further explores the conflict among the god Nihil, the magic-wielding Azwans, and narrator Hadara.

Sixteen-year-old pale, golden-eyed Hadara of Port Sapphire in the world of Kuldor is wondering if she is possessed. Ever since she thwarted the Azwans’ attempt to sacrifice her, she has been able to understand the languages of the lizardlike Gek and the Feroxi, pale-skinned, blue-eyed giants. The Feroxi have been sent to Port Sapphire to put the populace back on track in the pious worship of the god Nihil, whose creed has to do with doubting certainties and being certain of doubts. It’s a fuzzy premise that doesn’t get any clearer because plot and character consistency is a deep and ongoing problem. The amplification of the fledgling romance between Hadara and tawny-skinned, brown-eyed Valeo—a half-human, half-Feroxi guard—is fraught with so many emotional reversals that readers will be forgiven for thinking that they are manufactured solely to conveniently fit themselves into the plot point of the moment. Hadara’s overabundant interior monologues do not add any clarity, instead coming across as contradictory and obtuse. Worldbuilding is trivialized by the characters’ ostentatious habit of taking Nihil’s name in vain, à la “Nihil’s nuts,” “Nihil’s scrawny buttocks,” “Nihil’s knuckles,” etc.