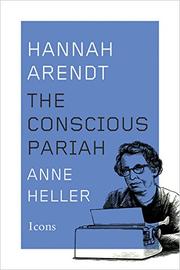 A Life in Dark Times

A perceptive life of the controversial political philosopher.

Hannah Arendt (1906-1975) became “an icon almost overnight” after the publication of The Origins of Totalitarianism (1951), a book that former Esquire fiction editor Heller (Ayn Rand and the World She Made, 2009) praises as “the most passionate, complex, moving, and influential account ever written of the clash between civilization and official barbarism in twentieth-century Europe.” It also was Arendt’s first book in English, the language she learned with some difficulty after arriving in New York in 1941, a refugee from Germany and Vichy France. By the 1950s, Arendt established a reputation as an outspoken political theorist in essays on anti-Semitism, German existentialism, and minority rights that appeared in prestigious publications that included Contemporary Jewish Record, Partisan Review, Commentary, and the Nation. New York intellectuals were smitten by the woman Alfred Kazin called “a blazing Jew.” Arendt seemed the perfect writer to report for the New Yorker on the trial, in 1963, of Nazi SS Officer Adolf Eichmann, but her articles, followed by the book Eichmann in Jerusalem: The Banality of Evil, generated outrage. Friends, allies, and colleagues accused her of “moral deafness. Instead of damning Eichmann as the embodiment of evil, she portrayed him as a new “ ‘mass man,’ a universal, postindustrial, semi-Marxian type who was characteristically lonely, rootless, socially adrift, economically expendable, and susceptible to both nihilism and authoritarianism.” After her death, when her love affair with philosopher and Nazi party member Martin Heidegger became known, critics accused her of “Jewish ‘self-hatred.’ ” Heller judiciously places both scandals in the context of Arendt’s youth in Germany, where she felt exempt from anti-Semitic remarks directed mostly to Eastern European Jews; her education as a philosopher; her struggles with Zionism and her own Jewish identity; and her prolific writings on violence, truth, and political discourse.

An evenhanded, sympathetic biography of a defiant thinker.