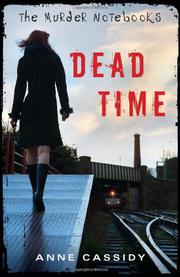 From the Murder Notebooks series

After a disastrous year at boarding school, 17-year-old Rose Smith has transferred to a dodgy local high school in London. The disappearance of her mother and mother's boyfriend five years earlier has landed her with her posh grandmother, who forbids her to see the boyfriend's son, Joshua. Just as Rose and Joshua reconnect, Rose's classmates start turning up dead, and she can't resist the temptation to investigate on her own, even when it puts her in danger. Meanwhile, Joshua draws Rose closer in his own pursuit of the truth about their parents' disappearance, leading Rose to struggle with conflicting feelings that will resonate with readers of Cassandra Clare's Mortal Instruments series. Rose's thorny personality—several characters tell her that she's hard to like—is only partially mitigated by stiff, third-person glimpses into her personality. In clipped sentences, this formulaic mystery supplies the usual panoply of suspects and red herrings. The plot is awkwardly elliptical; crucial historical details are withheld from readers until nearly halfway through the tale, and repeated allusions to a devastating betrayal at boarding school are never explained. As the first installment in the Murder Notebooks series, the tale leaves most questions still unanswered.

For murder-mystery fans, there is enough suspense to keep the pages turning, but this story is not likely to convert teens to the genre.