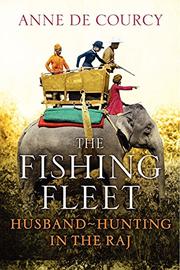 A British biographer finds lively fodder from the accounts of Victorian women venturing to India to find a spouse—and the men who scooped them up.

De Courcy (Snowdon, 2010, etc.) fleshes out the stereotypical portrait of the wilting English gentlewoman who functioned chiefly as a means of perpetuating the imperial status quo across the British empire. The women she chronicles in this vigorous study, sent to India to find a husband mostly during the Raj period (roughly 1850 to 1950), faced hardships with equanimity and purpose. Fortunes were to be had for the intrepid young men who flocked to India to work in the East India Company, Indian Civil Service, and other trading, government and army ventures, although diseases and an unfamiliar climate rendered their work perilous. The depletion of the marriage pool back in England left many English girls, those without fortunes, beauty or good connections, facing spinster futures during a time when marriage largely defined women, who had few other prospects. However, in India, men outnumbered women four to one, de Courcy estimates, increasing a woman’s chances of finding a mate. Yet these were not passive women, and as the author delves deeper into their diaries and letters, she finds that voyaging to India allowed many women an exciting outlet they did not have in England. However, the arduous voyage took many months and required hardiness, as did weathering illness and oppressive heat. After hasty marriages to eager, lonely men, the wives were often obliged to pull up stakes and move constantly as their husbands’ jobs required or live out in the jungles where their plantations were located. Moreover, they often faced long separations from their children, sent back home to boarding schools. De Courcy offers numerous, richly detailed accounts.