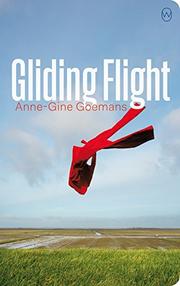 A teenage boy trains his pet geese surrounded by a cast of characters even more eccentric than he is.

It’s the present day, more or less, and we’re in the Netherlands. Gieles is almost 15. His mother has been gone for months on yet another vague mission of aid to Africa. Gieles and his father wait at home, with Uncle Fred, next door to an airport runway that has been steadily taking over the neighborhood. Gieles’ father works for the airport, shooing away the flocks of birds that threaten to cause accidents. Gieles’ personal hero is Capt. Sully, who miraculously landed a plane after a number of geese tangled themselves up in its engines. This is Goemans’ second novel, her first to be translated into English. It’s a funny, tenderhearted book reminiscent of Little Miss Sunshine—it has a similar cast of lost, confused, and eccentric characters. Gieles befriends an overweight older neighbor who calls himself Super Waling and who soon starts sharing with Gieles chapters of a story he’s writing. Super Waling’s story concerns his own ancestors but also the larger Dutch history of reclaiming land from water. Gieles, meanwhile, is trying to train his two pet geese to perform a secret feat of heroics so impressive it will convince his wayward mother to stay home. Goemans occasionally skates a little too close to sentimentality, and not all her characters come equally to life (Gieles’ silent, stoic father, for one), but still, the novel is a wonderful mix of humor and gentle melancholy. Gieles is a compassionate boy, and he seems to draw wounded people toward him in the same way that he draws forward his geese. We’d be lucky to have more like him in this world.

A sweet, sympathetic novel with a sense of humor.