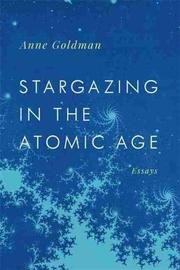 STARGAZING IN THE ATOMIC AGE

The efflorescence of energy and creativity in Jewish communities in the traumatic 20th century is celebrated in these sparkling essays on Jewish intellectuals.

Goldman explores the lives and works of modern Jewish scientists, artists, composers, and writers, putting them in the context of the war, persecution, and migration to America, which shaped their lives and the larger Western culture in which they were rooted. She probes Einstein’s love of Mozart’s music; the kvetching vigor of the Hebrews as they journey out of Egypt in the book of Exodus; the restless, questioning mindset of Jewish scientists who helped develop the atom bomb; the love-hate relationship of painters Marc Chagall and Mark Rothko with the soulful yet blighted Russian homeland they fled; the resonances between Dante’s vision of hell in The Divine Comedyand Primo Levi’s memoirs of his imprisonment in Auschwitz; the exuberance and vitality of novelist Saul Bellow’s Jewish protagonists; and the strange beauty of fractal equations discovered by mathematician Benoit Mandelbrot. Throughout the collection, she reminisces about her raucous family, especially her exuberant, exasperating father, Mike, a Harvard public health professor, whom she compares to physicist Richard Feynman for his gleeful iconoclasm in puncturing the pretensions of upper-crust WASPs. Goldman’s essays effervesce with unexpected discursions into everything from the story of Sodom and Gomorrah to the art of emergency auto repairs; from this erudition, she retrieves unexpected but insightful relationships, wrapping it all in gorgeously evocative prose. (Hymning the indelible opening of George Gershwin’s Rhapsody in Blue,she writes, “The clarinet’s chromatic rush up the scale is American as a slide into home plate and Jewish as a village wedding dance, a Fifth Avenue strut with a swashbuckling nudge and wink, a street whistle that deepens into expressiveness as the music climbs upward: the melancholy brightness of klezmer stretched around the swagger of jazz.”) The result is an absorbing excavation of the Jewish experience.

A beguiling meditation on Jewish achievements that shine brightly against a dark background.