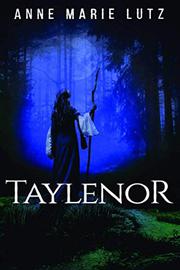 A novel follows a priest of the goddess Imn-ashu as she fulfills her duty as a Seeker and wields her faith against demons descending on the world.

Jaena travels the countryside searching for children who have inherited taylen, the ability to learn magic. The priest’s senses lead her to the village of Bless-us-goddess, where she quickly finds Wiel, a boy who she believes is a taylenor. Wiel’s parents object to Jaena's taking him away, but when she tells the boy the truth about his condition, he agrees to accompany her to a hospital. Unfortunately, the gift of learning magic is bittersweet: It comes with a deadly illness that only a few—like Mage Herrein, who employs Jaena as a Seeker—have ever survived. Jaena hopes that with her help Wiel will live and become a Mage instead of wasting away like countless others. On their journey, Jaena catches sight of a hulking, wolflike animal among the trees, which reignites her fear that demons have returned to the countryside. In theory, Mage Herrein can defend the city of Uthen, but his strength against demons and the Eastern Mage has been untested for over a hundred years. With the help of her charming friend Metten and the nobleman Halpen, who has a vestigial trace of taylen, Jaena tries to turn the dark tide that threatens to overwhelm the city as she guides Wiel to what she thinks is a safe harbor. In a welcome change to the typical hero’s journey, Lutz’s (Sword of Jashan, 2019, etc.) epic fantasy deftly explores the perspective of a guardian and mentor rather than a talented young charge. Jaena’s palpable sense of duty toward Wiel is a much more intriguing story thread than the catastrophes that serve as a call to adventure in many fantasy novels. The author delivers strong worldbuilding and a fast-paced plot, which serve the book well even when it edges toward standard fantasy fare. In addition, examinations of the characters’ complex emotions add depth when some of the twists in the tale are not hard for readers to foresee.

This well-crafted epic fantasy about a mentor’s travels veers off the path at just the right moments.