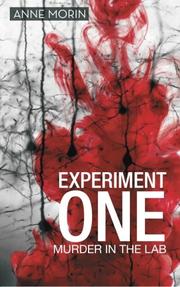 Experiment One: Murder in the Lab

In Morin’s debut thriller, a neuroscientist starts a murder investigation after a grad student’s bludgeoned body turns up in her research lab.

A Friday afternoon faculty meeting puts professor Yvette Bilodeau so far behind that she has to spend her Saturday at the university’s laboratory. But the loss of her day off is no longer a concern after she spots the bloody corpse of her student Mike DesFleur on the lab floor. Detective Brandell Young gets the case, and he and Yvette are initially at a loss as to why someone killed Mike with an ice-breaking hammer. For one, there doesn’t appear to be anything missing from the lab. Anonymous calls to the biology department’s chairman suggest that Mike fabricated his research data and was too busy philandering to do lab work. But Yvette and Brandell, who often discuss the case, suspect the murderer was after something that Mike was working on. Later, when an unknown person pushes past Yvette one morning as she walks into the darkened lab, it seems to confirm the theory. Brandell’s investigation soon includes a second murder, and Yvette realizes that someone did indeed steal something from the lab; she branches off on her own to find the thief. The novel begins as a straight-ahead mystery; Brandell, at one point, considers each of Yvette’s students, and even Yvette herself, as viable suspects. The story reveals the identity of the murderer about halfway through, however, and even details surrounding the first death. As a result, the narrative loses some of its steam, as Yvette becomes more worried about getting access to her lab for her students’ classes. However, Morin also provides a hefty amount of perspective from a clearly disturbed psychopath, who’d probably kill more people if not maintaining a social pretense. It’s certainly fun to see whether Yvette and Brandell’s parallel investigations will merge together and single out the same perp. However, because readers are already aware of the killer’s identity and motive, the ending is a bit nondescript.

This book’s scientist protagonist is a good enough sleuth to handle a more engaging mystery.