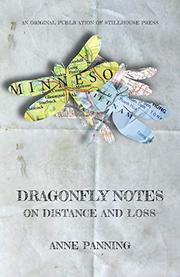 Autobiographical essays that outline the days before and after a parent’s death.

“My mother appears regularly to me in the form of a dragonfly—or so I like to think,” writes Panning (Creative Writing/The Coll. at Brockport; Butter, 2012, etc.) at the start of this graceful bereavement memoir. In some cultures, she learned, dragonflies are hailed as the souls of the dead, and she whimsically appropriates this notion as she chronicles the decade following her mother’s demise. Barbara “Barb” Panning died in July 2007, three years after she’d had a mesh bladder sling surgically implanted to correct pelvic organ prolapse. A Food and Drug Administration warning against such slings came into effect the next year, following more than 1,000 complaints about side effects, the author writes. In Barb’s case, these effects included a hematoma and incontinence. A corrective surgery, Panning says, left her mother in hemorrhagic shock, and her organs shut down. After three weeks, the family decided to take her off of life support: “I wanted it to end, but I never wanted it to end,” Panning remembers. She offers similarly nuanced memories of her family’s earlier years. While looking through her mother’s yearbooks and a cache of apology notes that her father wrote to her mom over the years, she wondered why Barb stayed with him, despite his drinking problem, which he even had in high school. Panning, a 2007 Flannery O’Connor Award winner, delivers a remembrance that’s bittersweet with nostalgia and longing, but it never wallows in sadness, highlighting bright spots too—a jazz club outing with her mother, a six-month sabbatical that the author took in Vietnam with her husband and children, and a time when she and her sister re-created their mother’s lemon dessert. There are also dragonfly moments, often appearing as brief interludes between longer essays, including accounts of clouds of the insects surrounding a cruise ship or swarming the author on a jog. To her, the insects represent “sacredness” and “fleeting beauty”—the very things that her narrative seems determined to find.

An affecting remembrance in which pinpricks of meaning light the darkness of grief.