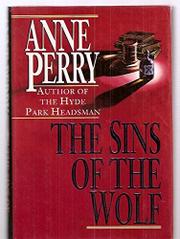 THE SINS OF THE WOLF

Crimean War veteran nurse Hester Latterly thinks she's taking a routine job escorting ailing Edinburgh publishing matriarch Mary Farraline to London to visit her youngest daughter. Her only responsibility? To make sure Mary takes each dose of her heart medicine. But Mary dies on the trip, and Hester finds Mary's gray pearl brooch in her own bag just one step ahead of the police. It's a setup, of course, but which of Mary's children—prosecutor Alastair, self-possessed Oonagh, beautiful, useless Eilish, weak- willed Kenneth—or which of their spouses doctored her digitalis and let Hester take the blame? Hester's sometime employer, Inspector William Monk, blithely (and feloniously) insinuating himself into the Farraline household as a consultant to the prosecution, finds family secrets aplenty—both Eilish and Alastair's wife, Deirdra, sneak out of the family manse in the middle of the night, and drunken Uncle Hector babbles about hidden rooms. The tide is turned in Hester's favor when Florence Nightingale, in an amusingly amateurish courtroom sequence, testifies to her feminist worthiness. Still, the verdict of Not Proven, leaving a shadow over Hester's innocence, doesn't sit well with Hester or Monk, and they promptly set out—evidently with the Farralines' complete and unbelievable cooperation—on a new investigation to unmask the real killer. Not so overstuffed with period detail as prolific Perry's recent outings (The Hyde Park Headsman, 1993, etc.), but the Farraline revelations would pass belief—if it weren't for the anesthetic power of Perry's prose, whose phrases fall as predictably as silver-plated spoons into their plushly appointed compartments. (Mystery Guild main selection; Literary Guild alternate selection)