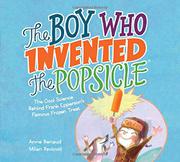 THE BOY WHO INVENTED THE POPSICLE

Boxing is known as the sweet science, but the inventor of the Popsicle, might disagree.

Born in 1894, Frank William Epperson always seemed to know he wanted to be a great inventor when he grew up. He was an inquisitive young boy, always pondering big questions: “Do goldfish sleep? Do ants have ears? Do woodpeckers get headaches from pecking all day?” Frank’s back porch was his laboratory, where he “tinkered and tested. Analyzed and scrutinized.” When he was 10, he built a handcar with two handles and zipped around the neighborhood. But it was his interest in liquids, flavored soda waters in particular, that led to his great invention. One unusually cold San Francisco night in 1905, he left one of his drinks outside, and by morning it had frozen. “He had invented a frozen drink on a stick!” But it wasn’t until years later that the adult Epperson acted on the memory. He created a box in which he could freeze several test tubes filled with fruit juice and created the Ep-sicle to sell at shops, county fairs, and beaches. Pavlović’s exuberant mixed-media illustrations are the perfect complement to Renaud’s lively text. They even intersperse science experiments to help young readers understand the science behind Frank’s procedures. Epperson, his family, and his environs were white; the final double-page spread offers a diverse cast of characters united in their love of Epperson’s invention, now called Popsicles.