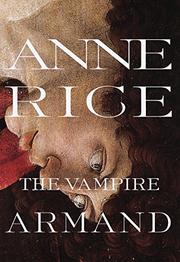 Here continue the stories of Armand, first met in Interview with the Vampire (1976), and Marius, encountered in the ancient Rome of Pandora and still alive in New Orleans, where he tends the comatose body of top vampire Lestat, who’s returned from Heaven and Hell with Veronica’s Veil (Memnoch the Devil, 1995). The young Armand, first given the dark gift 500 years ago by Marius, still looks as boyish as a Botticelli angel and remains in thrall to Marius, who’s trying to fathom the long sleep of Lestat and perhaps woo the unwilling Armand away from his two mortal children: dark-haired little Benji, an Arab boy, and the tender, willowy Sybelle. When the recently befanged and elderly scholar David Talbot, Superior General of the Talamasca, an order of psychic detectives, shows up, he is no longer old but has switched to a young body and coaxes Armand (as he did 2,000-year-old Pandora) to relate his memoirs to him. With vague memories of spending his boyhood in Kiev Rus, Armand awoke as an amnesiac boy in Istanbul many centuries ago as slave or captive, and was sold into Venice, where Marius, a great Renaissance painter with a taste for lavish living, took him as a special member of his harem of boys, making him a sex slave. By day, Marius disappears, returns to paint by night, and at last grants Armand eternal life. He educates him in history, philosophy, and the law. Then the Children of Darkness, vampires who kill for God, burn the palazzo and paintings, burn Marius and his harem, and capture Armand. Marius, of course, is not really dead. Eventually, all turns on Armand’s love for Benji and Sybelle, on Rice’s lush reading of Beethoven’s Appassionata piano sonata, and on a dreamy awakening of Lestat as Christ. Rice at her ripest, with research easily absorbed by the voluptuous text, though she fawns over her weaker, or more sentimental, moments.