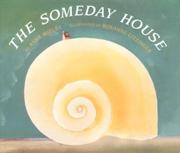 This flight of imagination by Shelby (Homeplace, 1995, etc.) has a poignant cast. ``Someday,'' promises the narrator, ``we'll live in a house on a mountain. We'll sit on the roof and fill the sky with bubbles.'' ``Someday, we'll live in a house by the sea,'' or above a bakery, underground, even in space, and somehow, the melancholy implication is that there is no home just now. Folding warm colors together, Litzinger gives her paintings a cheerful aspect that lightens the tone rather than fighting it; three children, each with a different skin color, smile, and play in and around a small house that is adapted to different situations and is last seen with DNA-like strings of extra rooms twisting above the roof. Pair this with Eve Bunting's Fly Away Home (1991) or Elizabeth Hathorn's Way Home (1994) to set younger readers thinking. (Picture book. 5-7)