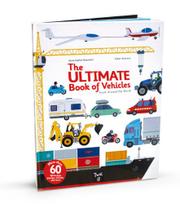 THE ULTIMATE BOOK OF VEHICLES

From Around the World

Fans of trucks, trains, aircraft, and other conveyances large and small will find dozens gathered here, lined up neatly in squads according to function from “Demolition” to “Space Travel.”

Though most of the vehicles are easily identifiable by sight, small labels will clue in readers unfamiliar with specialized monikers like “wheel excavator” or vehicles not found in the United States, such as the colorfully decorated Pakistani bus and a motorized “pooper scooper scooter” from France. Cartoon passengers or other human figures convey a sense of size, and with occasional concessions, the floating, wheeled or winged machines are depicted at least close to relative scale on each spread. But the pleasures of poring over all the transports, earth movers and Earth leavers will pall quickly even for confirmed enthusiasts: So flat and generic are the images that many with similar purposes look like variations on the same shape. Moreover, an (rather skimpy) assortment of jointed arms, sliders, spinners and flaps that lift to provide cutaway views create at best only localized feelings of movement or visual drama. Also, the titular “ultimate” begs the lack of military or (aside from a space shuttle on the final spread) historical vehicles on view.

A sizable gallery but, overall, a monotonous one.