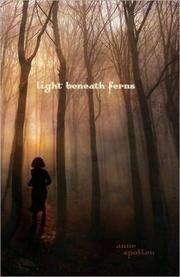 This second novel from the author of The Shape of Water (2008) is equally strong on lyrical style and original voice but falls short on plot. Elizah Rayne’s mother has taken a job as cemetery caretaker in her hometown. Elizah’s dad, a gambling addict, is on the run from creditors. At 14, Elizah, like her parents, is a loner with no interest in fitting into her new world. She ignores enemies and shuns potential friends, including the basketball star who (inexplicably) pursues her. But a mysterious boy, Nathaniel, whose touch is cold but warms her later, intrigues Elizah, and she allows him to draw her into his strange world. After Elizah’s mother joins a psychic-led group that seeks out ghosts in the cemetery, readers will figure out where the story is headed many pages before Elizah does. Yet Spollen’s writing is evocative enough to supply much of the tension and creepiness missing from the plot. While it fails as a straightforward ghost story, the novel succeeds in creating a vivid, contrarian protagonist who retains reader interest. (Paranormal. 12 & up)