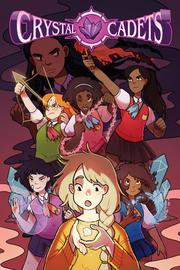 From the Crystal Cadets series, volume 1

On her birthday, a teenager learns that she is one of the Crystal Cadets, a textbook group of young, magic-wielding heroines charged with saving the world from vague, clichéd darkness.

This series opener introduces Zoe to the other Crystal Cadets: Jasmine, Olivia, Gwen, Liz, Milena, and a sixth, who is used as a plot twist. They ride fabulous creatures like winged horses and giant butterflies and use magical tools to fight off creepy people with black eyes. Zoe seems only momentarily fazed to find her parents evidently possessed before being whisked away. Glib dialogue makes the book feel trite and superficial. “Nonny, nonny boo boo. You can’t catch me!” sings a young cadet as she faces off against what looks like a toothed shadow. Attempts at puns create cringe-worthy moments: “Looks like the crystal's out of the bag!” The story was originally published as a digital comic series, and Toole’s writing offers mostly choppy transitions and is further hampered by poor worldbuilding, logic, and back story. In what feels like a halfhearted stab at grounding the story, Olivia explains, “The darkness has been around forever. It feeds on bad stuff, like fear and greed and bad manners.” If both story and illustrations remind readers of Sailor Moon, that is about par for the course. O’Neill’s depictions are fair and in the vein of manga comics, though at times they look depthless.